I know I mentioned at the beginning of the year that I had a bunch of new skills I wanted to learn this year, such as entomology pinning and wood carving, but I failed to mention that I want to take on more personal sewing projects. I’ve been spending quite a bit of my spare time making aprons for my Etsy shop and private orders, but besides that I haven’t done any sewing for myself. There are a number of sewing projects on my personal to-do list including a wrap dress (I’ve had the pattern for two or three years now?), a quilt (I have the fabric all ready for this one too!), and a raincoat (let’s not talk about this one – I’ve had the fabric AND pattern for like 5 years for this one). Doesn’t it always seem I have a million projects I want to do? Yes. But anyway, the first priority project for me was a blouse.

Let me back up. I have basically no experience when it comes to sewing clothing – it just seemed so daunting to me (quilts, aprons, bags – no problem! Clothing – eek!). What if it doesn’t fit? What if it looks like crap? What if I just spend $50 on materials, plus hours of my time, and I hate the end result? After all, it’s not like knitting – if you screw it up or hate it, you can just unravel it and make something else. Well, I decided to take the plunge. But not just a little plunge in the kiddy pool, it was a dive in to the deep end. Not only did I make a shirt, I made the pattern myself. Go big or go home, I guess.

I actually started with a shirt that I bought from Gap Outlet that I love the look and fit of. I decided that I didn’t want it to be exactly the same so I would include some slight alterations. The major alteration being that I wanted my version to be sleeveless. I almost always wear cardigans or blazers over my blouses, so sleeveless is my preference. The thing I liked most about the original blouse was the front – it is actually two pieces of fabric layered to create a nice little tulip front. 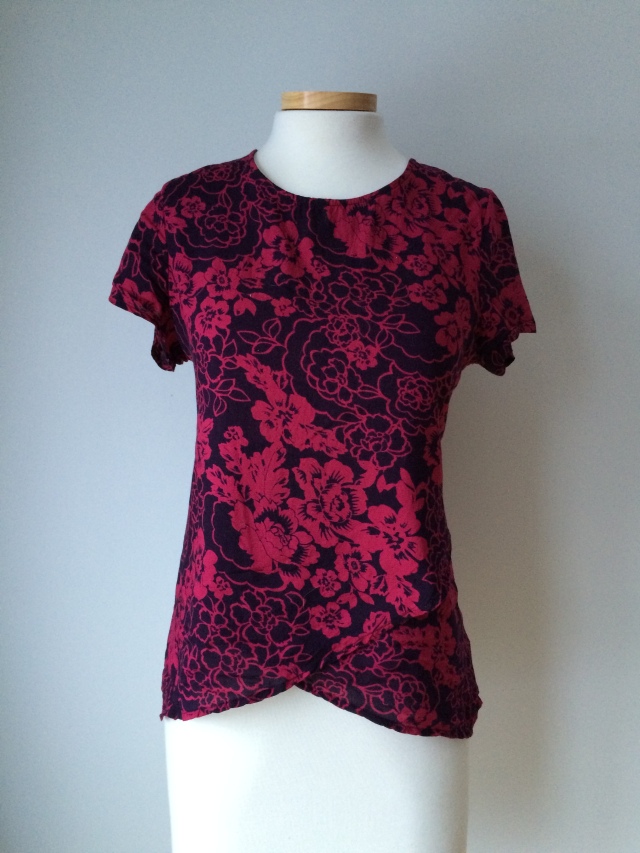 See? The Gap shirt is really pretty with a nice shape.

First I drew a rough outline of the original shirt using a few pieces of paper taped together from a roll of light kraft paper I already had on hand. I bought this roll awhile back at Benjamin Moore and it is for covering floors and such while painting, but this roll is so handy for basically everything, especially making patterns. The back piece of the shirt was the easiest to trace but doing the front was a bit more tricky and I actually ended up screwing it up a bit (no project is without its obstacles – we’ll get to this later). After I was finished tracing out the pieces, I held them together to make sure they would fit, did a bit of trimming to ensure the pieces were even, and then added about 1/4 around each piece for seam allowances. This is all so scientific and interesting – basically, I winged the entire thing. 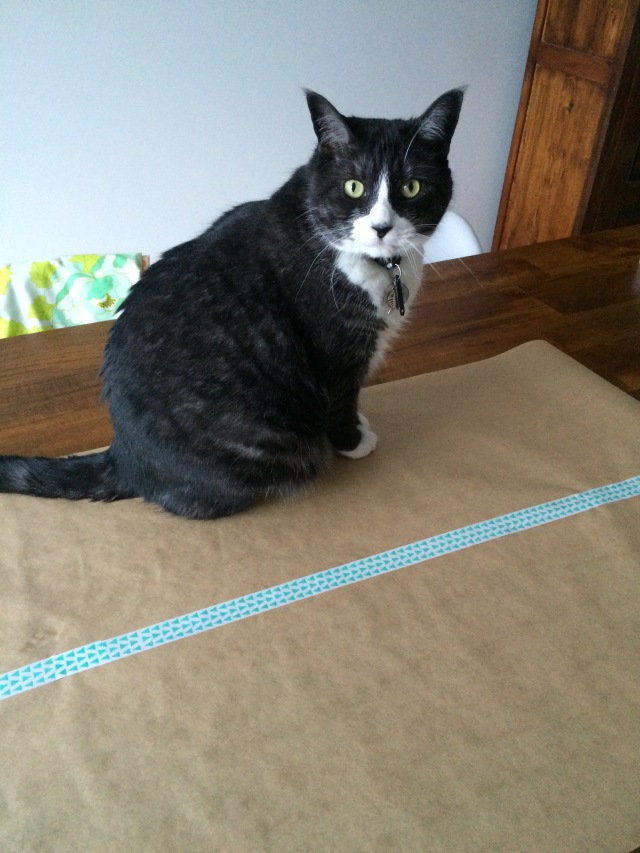 The cat helped me make my pattern.

One of the most difficult parts of the whole planning process, other than fixing my screw up (I will get to this) was actually choosing fabric. The original shirt was a nice flight flowing cotton but I didn’t have anything like that on hand. For about a year I’ve been holding on to a quilting weight fabric from my favorite artist, Leah Duncan. I had considered turning it in to a dress last summer (with that pattern I’ve been holding on to for three years) but chickened out at the last minute. I waffled for a bit on using a quilting weight fabric since it is heavier and may not translate too well on to apparel. But I guess I was feeling brave because I went ahead and chopped it up.

Then I had to actually think about how I was going to sew the pieces together. First I needed to hem the neckline, arm lines and bottom edges – I folded everything in very finely, pinned it in place, and carefully sewed the hems. Then I needed to sew the three pieces together – which was actually very simple. Okay so this is the part where I tell you that I put the blouse on and everything fit perfectly and I didn’t screw anything up. Or at least, it would have been. I put the blouse on and looked in the mirror – it wasn’t that bad. I mean, it wasn’t great, but it wasn’t terrible. There was a bit of weird poofing out between the armpits and shoulders – it just wasn’t sitting right. Luckily the problem was that my blouse was too big in that area (had it been the opposite and been too small, it would have been an unsalvageable disaster). I had to think about things for awhile – do I make the shoulders thinner? Do I sew in a weird dart? Do I cut out a piece of the fabric and re-hem in around the arms? I went with the latter – worst case scenario would be that I cut too much out and then vow to never sew another piece of clothing again (very dramatic-like).

So after a bit of cursing, cutting, and additional stitching I tried things on again. Better, but still not great. What did I do?! I think the problem was mostly do to with fabric choice, but also partly to do with winging the pattern and having absolutely zero experience with sewing clothing. I felt impotent and annoyed. Now what? I decided to try out some darts – worst case I could just rip them out. 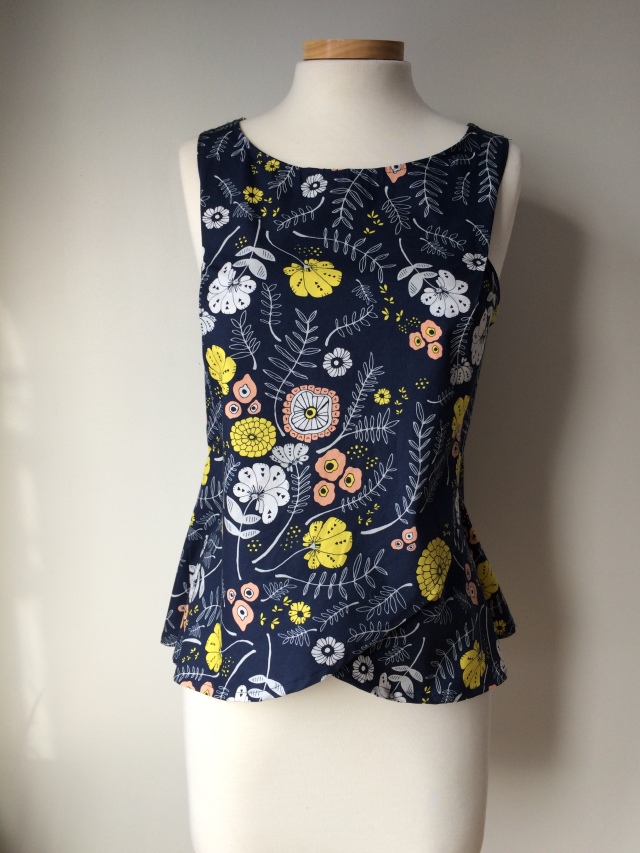 When all was said and done, the fit is so-so (not terrible but not perfect). The end result looks pretty good and if I wear it with a blazer, there is really no way you can tell that I screwed it up. And I guess it isn’t all that terrible if it is actually wearable. I have accepted the end result but I did learn a few valuable lessons which I will share with you:

– Quilting weight fabric is not ideal for apparel. I kind of knew this going in but I made the decision to use it anyway. It is fine, but it doesn’t give you a lot of shape and it doesn’t give you the nice drape that you would get from a lighter more flexible fabric. Quilting fabric does get softer over time and washes, but I still don’t think I would recommend it. I am not totally defeated against making another shirt, but I would use a voile or another lighter apparel specific fabric.

– I probably should have experimented with a fabric that wasn’t so precious to me – it was very risky to use a fabric I’ve been holding on to for over a year because I love it too much to cut up. This silly decision could have cost me my fabric.

So that’s it. I made, I fixed, I lived to tell the tale. And I’m actually looking forward to the next sewing project!