Words cannot express how excited I am to be heading back in to the garden for a new season! I’ve got all sorts of plants growing inside of the house (peppers, a few brassicas, marigolds, and I will be starting my tomatoes this weekend!) and I find myself sneaking glances at the back yard whenever I can, imagining it bursting with life and color in just a few short months.

It really doesn’t look like much now, but things are actually starting to grow! I noticed about a week ago that there were some green chives popping up, which led me to do a bit more exploring, and this is when I discovered that the rhubarb was also making an appearance! In addition, buds are on my lilac bushes! This is exciting of course because it means spring is here, but mostly because it is still so early! I have never experienced such a mild winter and early spring in this climate. I know that we will probably see a few more snow falls yet (some small ones in the forecast for today and this weekend) but I can totally deal with that – we are in the home stretch now! 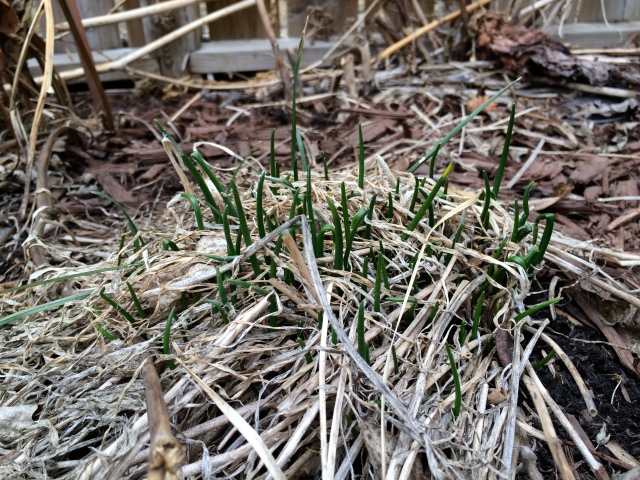 I’m usually not doing much in the garden this time of year because it is normally still covered in snow and/or ice. But since we somehow won the lottery this year and it currently has no snow or ice, I decided to do the first round of garbage clean up last week. I’m not talking dead plants or leaves or whatever – I’m talking actual garbage. Candy wrappers, latex gloves, cigarette butts (so, so many), underwear (yes, I found a pair of underwear), among other things. I filled a kitchen sized garbage bag from the front yard alone. There were only a few pieces of garbage in the back yard and I haven’t even tackled the alley yet, but I imagine it will fill another bag. Even though I was just picking up trash, it felt good to get outside in the yard. I’ll do a bit more this next week if the weather wants me to – more garbage pick-up, cleaning out what I left behind in one of the raised beds, raking the tiny bit of front lawn. And if I get really ambitious, I’ll head to the garden centre and buy some bags of manure to add to my raised beds.

Rhubarb poking its head out!

Are you doing anything in the garden yet?