The garden has been keeping me really busy this year. It’s been good though and I finally feel like things are starting to slow down. Which means I can kind of sit back and enjoy it as it is for a bit. And also maybe think about what I’d like to accomplish in the garden for the remainder of the season.

We recently had a huge heatwave, followed by some big rainfalls, and there is some more heat in the forecast, so things are really starting to get lush. There has already been some heavy duty pruning going on (we may have pruned away some branches from our neighbor’s tree) 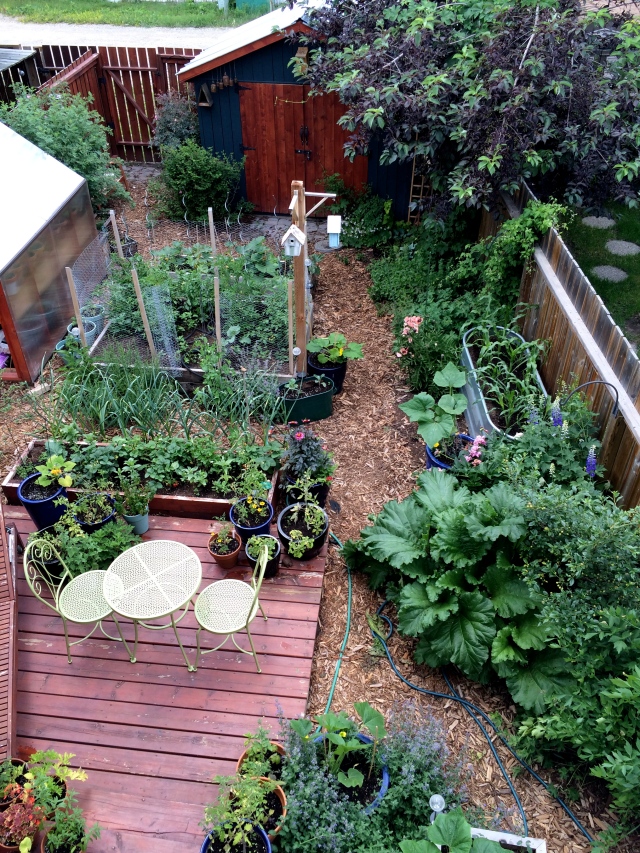 Looking pretty darn lush. I believe this is going to be the year of the squash in my garden, they are all looking so full and healthy – and I’ve even got a few baby squash forming. Making those squirrel proof seedling cages was a good idea – I didn’t lose any squash this year to those pesky creatures.

Last year I included some to-do lists for the garden, and I thought I might try it again this year. I really enjoy reading other garden blogger’s to-do lists, so maybe readers might find mine interesting as well. And if not, just skip to the pretty pictures.

– Weeding! I’ve been pulling out a few dandelions in the back yard as they pop up, but I really need to dedicate a couple of hours to just weeding, especially in the front yard. I rarely post photos of the front yard on my blog because it is so so sad, but I’m going to try to start. This is a realistic blog where I post the good, the bad, and the ugly, so I should be posting the front for your viewing displeasure (I’m being really hard on myself here, it’s not that bad).
– Figure out some sort of trellis for the back alley raised bed. I’m growing some pumpkins back there, so instead of having them grow down where we park the car, I’d prefer if they grew up. I have no idea what I’m going to do there. I need to think of something quickly though – I noticed that they are now growing out of their little squirrel-resistant cages.
– Clean up the alley. It is in a pretty shabby state right now. It needs to be weed whacked and I need to dispose of the dead corpse that is my former Christmas tree. And there is a lot of garbage. I’d really rather just keep forgetting this area exists, but those pumpkins are planted back there, and I water them almost every day, so I would rather look at something less horrifying and garbage-ridden. Also, our alley is a mud pit when it rains, so we really should get a load of gravel in there to help things. That task has been on the to-do list for awhile now.
– Fertilize the peppers and tomatoes. I am such a delinquent when it comes to fertilizing. I maybe do it like once a season. Must fertilize.
– Figure out what to do with the front yard. I referenced the nightmare of the front yard above, and I’m probably way over exaggerating it, but it really isn’t the way I want it and I kind of just want it to not exist right now. The main problem is the awful state of the lawn. The truth is, I don’t care about my lawn and I really haven’t made an effort to care for it for about 5 years or so. And it really shows. I wouldn’t actually even consider it a lawn anymore – it is mostly weeds and old cigarette butts (lots of pedestrian traffic on my street). The real reason for not caring for it is mainly because I think lawns are useless resource vampires, but also because it will eventually not exist in our yard. My vision for the front yard is for there to be no lawn, to expand the front porch in to something useful and pretty, to replace the front walk, to have some raised beds for edibles, and for the rest of it to be a low maintenance perennial garden with a couple of trees. The plan this year is to remove a little bit of the remaining lawn each week. Originally when I was thinking about what I wanted to do this summer, working on the front yard was not even a thought in my mind. The only real thought I’d had was that I wanted to come up with a rough plan to implement over the next 5 or so years. But then seeing the lawn this spring, and feeling nothing but embarrassment, rage, and contempt every time I saw it, I changed the plan. The good news is that it will cost me nothing but time. And possibly some money on cedar mulch if I get far enough. I’d love to hire it out and just have someone come in and set fire to it in one fell swoop, but I’ve already spent way too much on the garden this year, and I’d like to be able to eat, so I’ll have to do it slowly myself with nothing but my trusty spade.

I guess that’s the garden right now in a nutshell. Things are growing and even though my front yard is a bit of a touchy subject right now, I am pretty happy with the back yard this year. All in all, things are decent! How is your garden growing? 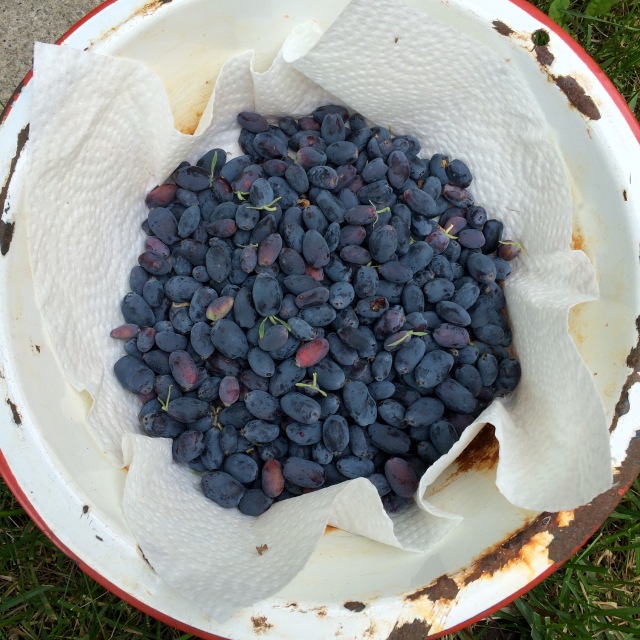 One more photo! The honeyberry harvest this year has been great so far! I have three small plants and I’ve never gotten more than a handful of berries in past years. This year the branches were bursting with fruit and it looks like there will be a second harvest! I intended to actually make something out of the first harvest, but they all got eaten raw before I had the chance #gardenerproblems