For about the last couple of weeks I’ve been flying solo as my husband has been away on a trip. I was pretty excited at first with the prospect of watching a ton of click flicks and getting a bunch of projects done around the house. But the truth is, the novelty wore off after a couple of days and I was getting a little tired of eating crackers for dinner (cooking for one just seemed pointless). Also, those projects? Yeah, I really didn’t get to any of them. Chick flicks? I mostly just watched Beverly Hills 90210 DVDs for the millionth time (I heart that show). Most of my time alone was spent finishing things I’d already started pre-husbandless or doing work in the garden. So much work in the garden.

But I was getting bored with being around the house with just myself and the cats. It all started with an impromptu visit to the Goodwill when I was running another errand. I had some good luck there, so then I decided to try another place. More luck. Then another and another. And the next thing I knew I was calling a friend to go to a big vintage market. Of course, then the bug had basically taken over my entire body. It needed to be fed.

This is where it all started! A little metal filing drawer I will be using for my seed collection, a crystal candy dish (I’ve been looking for one for under $5 for a long time!), a couple of little china plates, and my favorite find from this hunt was the little Siamese kitten (because apparently I need more ceramic cats in my life)!

The next hunt was just as good! Some large china platters, a few heavy flower frogs, a little crystal & silver bowl, and two little lead piggies! The pigs are my favorite and remind me of ones we played with as kids that came from my Grandma’s house. After doing a bit of research, they are most likely pre-war, which makes them a bit more special in my mind. 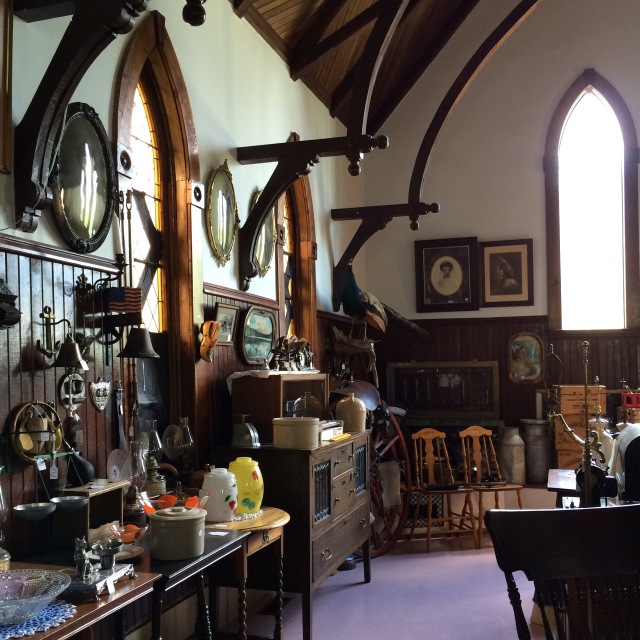 I was in heaven when I stumbled upon this antique shop in an old church. Not only was the architecture absolutely stunning, but the curation was unbelievable. I will definitely make the trip out of town to this shop again! And the best part was I totally stumbled in to it, I had no idea it existed until it was right in front of my face.

I thought it was finished feeding the bug after that 2 day ultra junking marathon, but then the next week I felt it coming back. So I went online and searched for upcoming estate sales. And starting making a list. And then I discovered some upcoming vintage markets which I thought were promising. It was basically a two week long junk-a-thon. 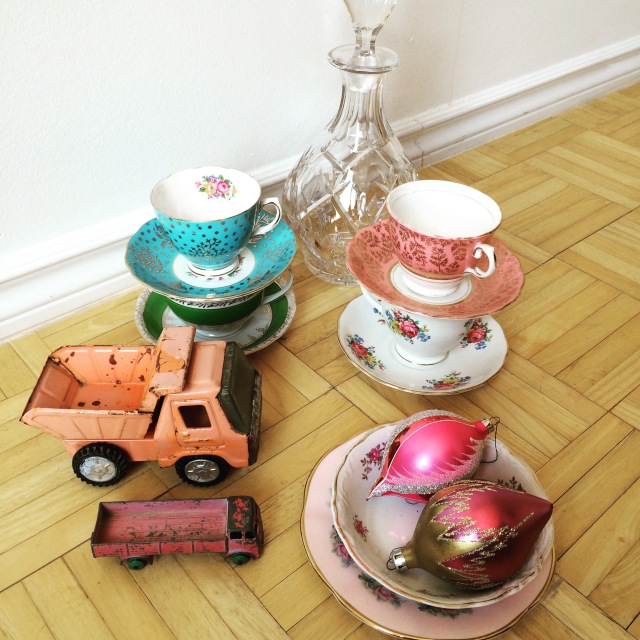 And the haul from my last excursion. I already have a bit of a teacup collection and I really haven’t bought any for several years. It was actually a point of conversation with a friend recently, where I mentioned I was laying off on the teacups as I needed to be selective about what I was bringing in to the collection. But I couldn’t resist when I saw these at an estate sale for $2.50/set! Plus the colors on the blue and pink sets are like nothing else I have in my collection. Trust me, it took all of my will power to only come home with four sets at those prices. And am I kicking myself now? Maybe a little, but more over the vintage vanity table I passed up for some stupid reason.

This bug usually hits me in the spring time, but for some reason this year it was much harder than normal. I guess I could be doing worse things. I’d love to hear about some of your junking adventures/scores!